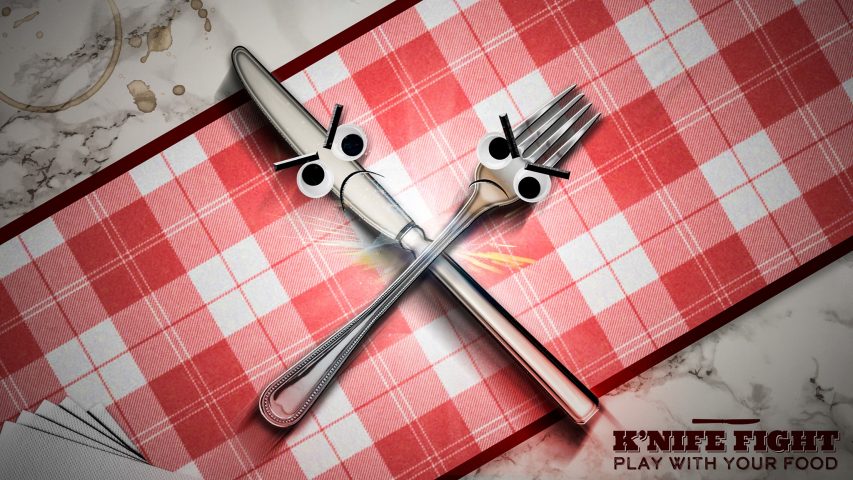 Prepare for the epic battle between right utensil and left utensil in this exciting party brawler!

Going out to dinner as a kid was an exercise of patience, determination, and ever wavering “table manners”. How does a kid with no smartphone pass the time between appetizer and entrée? Through nothing more than the items on the table and an overactive imagination, K’nife Fight was born.

K’nife Fight has you fight across multiple exotic eateries with an ever-growing selection of utensils to fight with. Launch your friends into oblivion as a steadfast spoon or impale your enemies as a sharpened butter knife. We’re also pretty sure you’re going to fight some utensils you’ve never heard of, we certainly hadn’t until we made the game!

Fully integrated Online, LAN, and Local, so you can play with your food, together. Up to four players can fight in a massive free for all brawl.

K’nife Fight came from the basic idea that a game should be fun first, before all else. We’re confident you’ll have a blast destroying your friends, and you will continue to see new characters, levels, and features added on a regular basis, free of charge with the full game.

K’nife Fight was started before the outbreak of COVID-19, before the pandemic changed all of our lives, we had reached out to several local restaurants to feature them as levels to promote them as awesome places to visit both in and out of game. All of them are hurting because of this, and we want to make sure we can help them as much as we can. The level from our demo is based on the amazing Columbia, Maryland based brewery, Hysteria Brewing. We hope that when this is all over, we’ll be able to see all of you down there celebrating with us!

Dogwood Gaming takes a strong stance against pay to win tactics and the exclusion of content that really should have been in a base game to begin with. With full transparency, the only additional paid content we plan to release is paid cosmetics released alongside the free updates to support our developers and artists who keep the game going. The cosmetics will come in packs, with one always free and obtainable in game. The cosmetics won’t make you any stronger, but we all know a good hat is the key to victory.